Have you ever been involved in a large class? How big was it? 50? 100? 300? The class that I coordinate, Biology 200, involves 1,200 students in a single term. It’s bigger than my high school was, and it’s one of the biggest classes in the Biology Program. Because it’s so big, people often assume that we must rely on computer-graded, multiple-choice tests, and that we don’t do any meaningful writing. To be honest, I’m terrible at writing multiple-choice questions, so I avoid it. As for writing, Biology 200 has always had an essay, but in the past it’s been pretty labour intensive, and not much fun for anyone. So, a few years ago we decided to change that.

So how do you build a writing assignment for 1,200 students that doesn’t crush the teaching team under the weight of supporting it? It’s a tall order, to be sure. It took a combination of creative thinking and careful planning, and the result was what we call our ‘Press Release Assignment’. Here’s some things I’ve learned about building writing assignments from this experience.

When instructors think about designing assignments, the easiest way to design is to have students write things, which the instructors will then read and mark. With 1,200 students, that simply won’t work. We can’t mark everything. So the things that we do mark need to be chosen wisely. The rest of the supporting assignments must be dealt with some other way, so that they don’t overwhelm us. For Biology 200 we used a combination of online quizzes and in-class facilitated workshops. For another class I used outlines instead of full drafts, for the same reason.

Think carefully about what you want students to learn from the writing, and your own limitations, and design with both in mind.

When I decided to change the writing assignment, I knew I needed to address the issues that students were having with reading scientific literature. They also struggled to translate science into plain English. And I wanted to keep it short (to reduce marking time). Once I knew that, having the students write a press release about a single science article seemed logical. A press release is about a single paper, and by design is short and in plain English. It has the additional advantage of allowing us to change the assignment, simply by changing the assigned paper.

We would all much rather work on ‘real’ things.

A press release is nothing like a scientific paper. It has a completely different goal than a scientific paper, which requires a different format and style than anything the average science student has written before. If I wanted students to succeed, I’d have to teach them the format before they could even start. So why bother? Why not just have them do a paper summary instead?

The answer is simple. Paper summaries are boring and students will treat them as such. A press release is something they can relate to. They can see the point of the writing, and they can see examples of them in the news every day.

As instructors who are going to have to read many of these assignments in a row, we really want our students to try to be interesting when they write. A press release is, by its very nature, meant to be interesting to draw the reader in. A paper summary has no such requirement.

Think about what will be hardest for the students, and then figure how to help with that portion.

When I settled on the press release format, I knew that the format itself was a challenge. I also knew from experience that students always struggle to translate science into plain English. To support them, I enlisted the help of Eric Jandciu, who holds both a Chemistry and Journalism degree. Together we built a workshop on science communication to help with language, and to highlight key differences between press releases and scientific papers.

What’s interesting to me about this assignment is that I don’t feel like it’s trying to teach the students anything new, but somehow this format is more focussed on the key things we’re trying to teach: scientific literacy, and clear, concise writing. The students ask us much better questions about the science in the papers they’re reading than they ever did before. They also report that they’ve learned that communicating science accurately in plain language is tougher than they expected. I’m not sure any student will ever say that they ‘like’ a writing assignment, but they can see the value in trying to write a press release that goes beyond their cell biology course.

For my part, I will admit an ulterior motive in building a press release assignment. I think that there is an increasing divide between scientists and the public. Carl Zimmer wrote a very nice piece exploring this issue. Biology 200’s press release assignment exposes students to science communication early in their careers. The students themselves report that it helps them think about the news differently. Graduate teaching assistants also get some mentorship on the topic, which is good timing for them; this year there were two TAs that had their work showcased in the news. We scientists have a responsibility to make our work accessible, so that those with no specialized training can understand it. If we don’t, and the public then ignores or misinterprets our work, then we have no one to blame but ourselves. 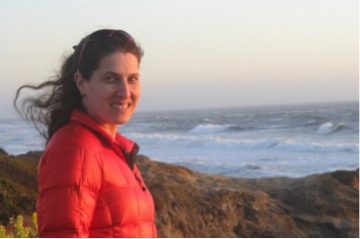 Robin never meant to be a botanist. That happened by accident. She grew up in Montreal as the daughter of a nurse and a veterinarian, so zoology and human health were high on the dinner table discussion topic list. After surviving the Québec cegep system, she did a B.Sc. at McMaster University, went backpacking in Europe and finally started graduate work in the Faculty of Medicine at Université de Montréal (En français). Through this she discovered a love for microscopes that was more important than any previous interest in studying animals. So when the opportunity arose to join the Botany Department at UBC for her PhD work, the promise of lots of really cool microscopy made it easy to leave the Animal Kingdom behind.

These days you can find her in front of the class, trying to sneak a little plant biology into every course she teaches. You can also find her on Twitter (@RobinYoungUBC), where she mostly retweets cool microscopy pictures.